How to Mount a Nexus 7 Tablet

I wanted to mount a Nexus 7 tablet in my vehicle after seeing posts on mbworld.org. Could be fun, right?

Well, here are some things to consider:

I will address these later.

Here is what you will need:

Now that we have our materials, let’s mount the tablet. Open the lid where the current monitor resides in the vehicle. With the lid up, measure underneath where you want your shower door catches to reside. What’s nice about these is that there is a white nub that is spring-loaded and will rest right underneath your screen door lid and exert pressure against the bottom of the monitor “floor”.

Once that’s all measured, place the cover on the tablet and mark where you want the shower door catches to lay on the Nexus 7 tablet case. Use my pictures below for reference. 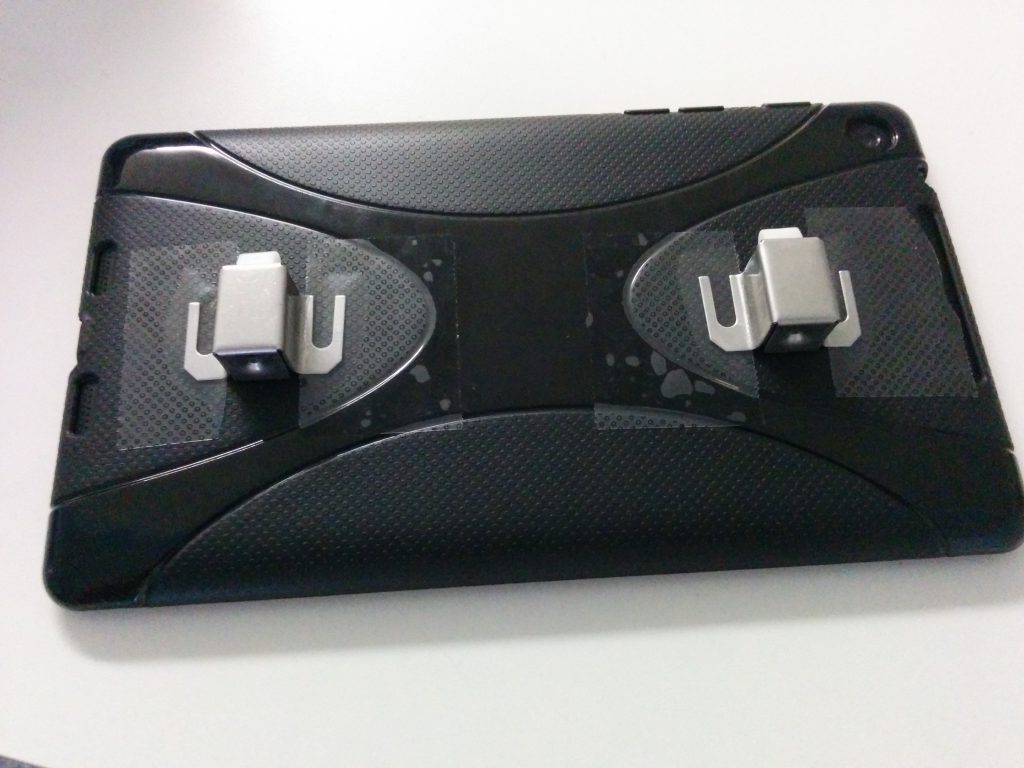 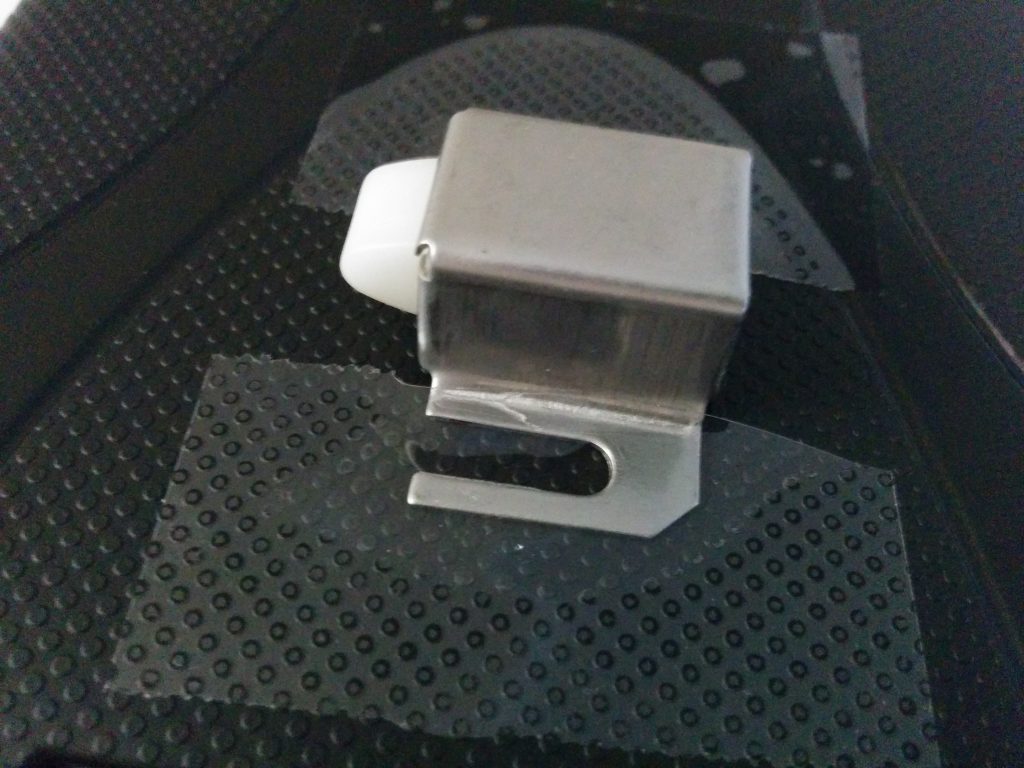 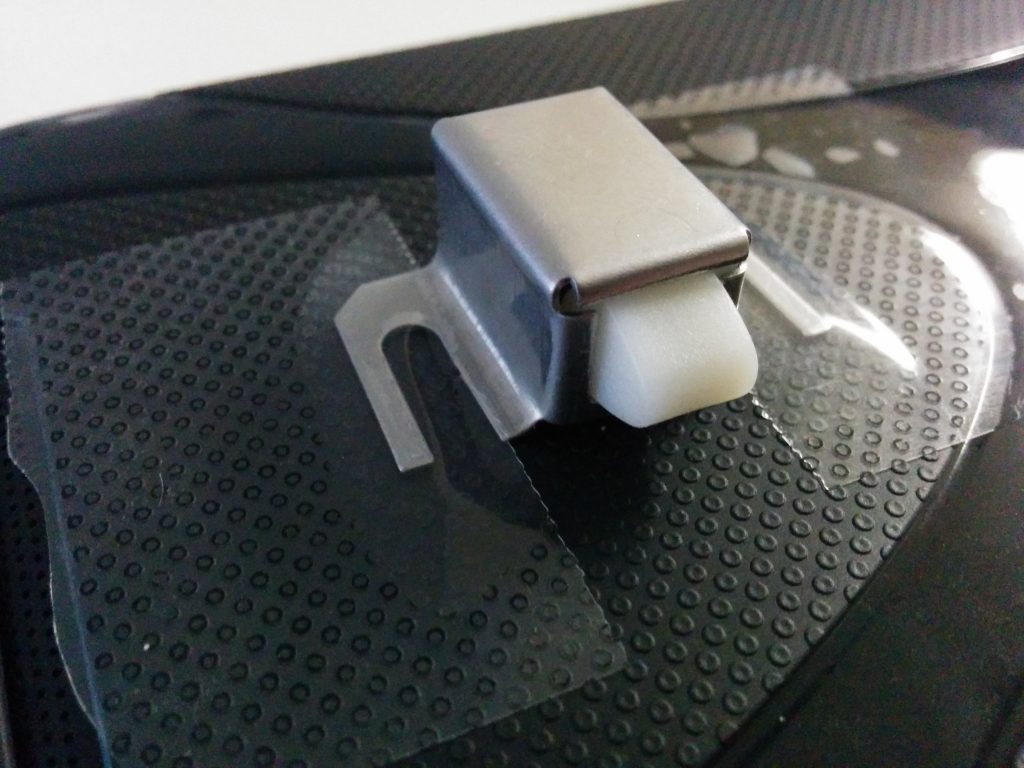 Great. Next, take the rubber feat and place them in the recessed area where the tablet will be sitting. These will be behind the tablet and act as a means of supporting the tablet as it is being forced in place by the shower door catches.

Excellent. Plug in and sync up the tablet to the ViseeO Tune2Air WMA1000. This will enable us stream music from the tablet, through the car speakers, and control skipping song tracks from our steering wheel. This is a life-saving device. The sound quality is brilliant. Also, remember to plug in your tablet. This is pretty important. I wove the wire out the back, onto the dash, in between the windshield and the dash (it slides down inside easily). I then ran it through the passenger’s side, in the side of the glove box (after taking the side cover off). I then plugged the USB cable into the DC inverter which is plugged into the switched cigarette lighter.

Next, setup Tasker. I use my phone as a hotspot for the tablet. I am also lazy. This is where Tasker comes into play. Create a profile with Tasker such that WiFi tethering is enabled when your car’s bluetooth is enabled (this happens when the key in the ignition is turned to the first or second stage). Have it disable WiFi tethering when the key is placed into the off stage. There are other nifty things you can do with Tasker as well. Such as, turning the screen on along with the WiFi and bluetooth when any sort of charge is entering the tablet. Perform the opposite action when DC is cut from the tablet. There are plenty of other functions you can do with your tablet, but this is just a start.

Here is the final product: 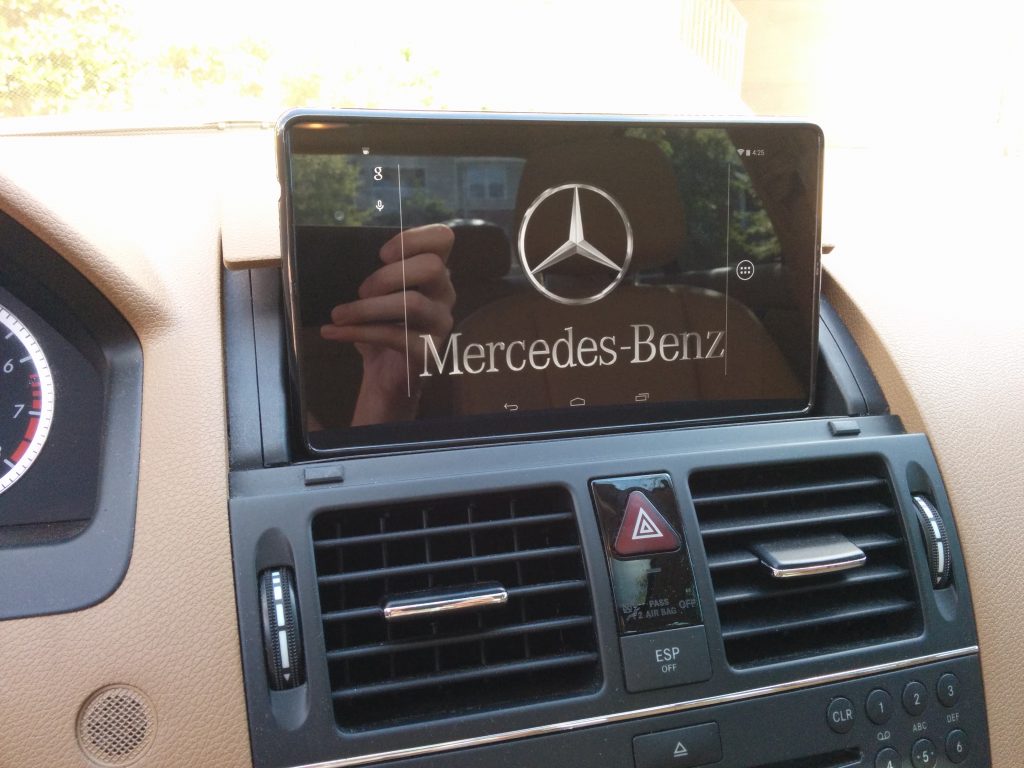 Now, my tutorial does not stop with the above. This just so happens to define where I thought I was finished. Here are the problems that arose, and how I fixed them to the best of my abilities.

Where I live, it can easily be 100F out during the summer, and humid. And be incessant. How did I solve this issue? Well, I have tinted windows, so that helps marginally. I make sure that the sunroof shade is up, and I park in the shade whenever I can. But most importantly, I got a windshield shade. That pretty much did the trick for me! Prior to that, my tablet would be scalding hot to the touch, and would auto-shutdown. Lesson number one.

This is a big one. Considering that the purpose of this project was to semi-permanently install this device in my vehicle, it’s gotta get juice somehow. Here were my ideas and how the evolved over time:

Well, this would be great, in theory. Within a 24 hour period, I would lose 10% of my tablet’s battery life. I figured that my alternator would charge it back up during my commute to work or anywhere else, but I would only pull a few percent per trip. This was after exploring the option of “fast-charging” provided from the hacked kernel, ElementalX. In theory, the tablet would be able to stay on for approximately 10 days, then I would have to take it out and charge it prior to my next trip. Not worth it, in my opinion.

This one didn’t last me very long. Sure, I saved battery life, but waiting for the tablet to boot up each and every time I switched on the ignition was infuriating. Especially since it took probably a 2 or more full minutes for the tablet to turn on, all of the apps to load, and for Pandora to start playing my music. If still interested, though, you can achieve this with the following command:

When the tablet receives any form of DC, it will power on the tablet.

Nope. Not a good idea. Unswitching your cigarette lighter by messing with the fuse (I think that it is fuse #71 for my car) can cause overheating and not good things to come thereafter. Other than that, your battery will miraculously drain. Not a good idea.

I tried this, and my battery pack died in 4 days. So much for trickle-charging.

This was my final solution. Now, I can do numerous things to improve this setup: I can put a Qi charger on the back of the tablet and run that to the battery pack, which in turn is plugged into the battery pack. The other USB cable will run to the cigarette lighter. In between, I can fashion a switch to cut off the USB cable running from the Qi charger, and re-engage when the vehicle is off. When I re-enter my vehicle, I flip the switch back off again. At some point in time my battery pack will need to be recharged in my home. One way to stave-off this issue slightly would be to find a faster means of charging the battery. The highest input charge I’ve found on a battery pack so far is 20V @ 2A.

If you have anything to contribute to this project, please leave a note in the comments. I hope that this helps someone!